Look at all these Goodies.... 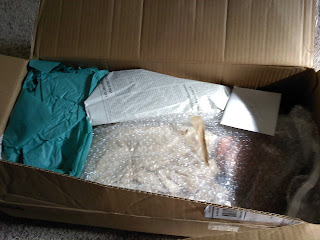 of all these Goodies...﻿ 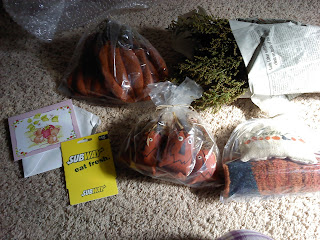 I am just tickled pink!
There was "FRESH" Sweet Annie... 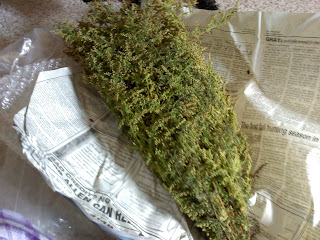 A $15 Subway Gift Card, YUM!
(forgot to take a picture)
This Beautiful Autumn pin keep.
(This is my first one)
I'm soooo happy! 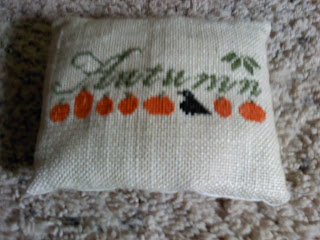 This awesome pumpkin rug hook.
(this is my first one of these too!)
Isn't it Beautiful! 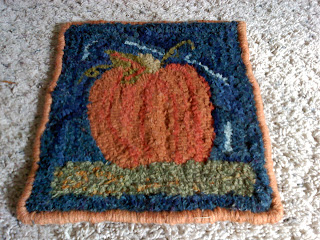 Look at all these pumpkins! 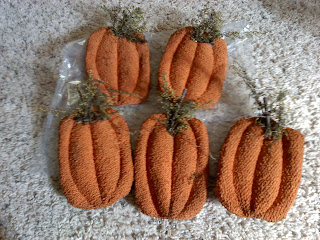 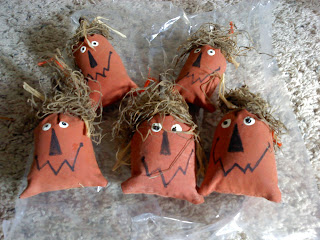 And last but not least...
Look at this little fellow!
(actually he is quite big)
Isn't he ADORABLE" 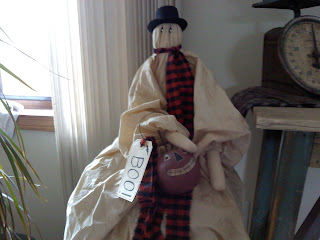 I made my first Fall Display
of all the goodies.... 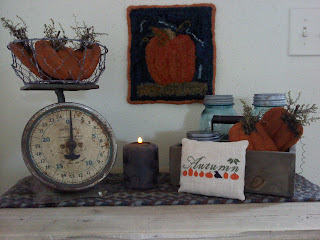 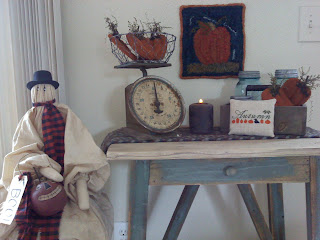 and the little pumpkins
hang on my tree.
Looks like I need to add
a few more things to my tree,
It's kinda bare! 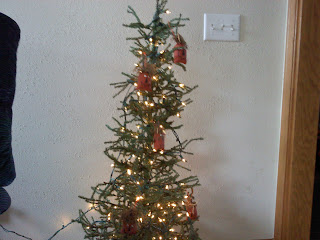 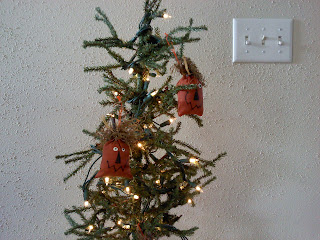 I sooo "LOVE"  it all.
Thank You Teri
for hosting a wonderful
Giveaway!
Posted by Sandi @ The Primitive Skate at 11:43 AM 13 comments:

Janice from
Black Creek Primitives﻿
had a Witch Hat Contest
about a month ago.
She sewed up a Witch Hat
and you had to leave a
comment on how you would
decorate the hat.
I was the Winner.
This is the hat I recieved.
(sorry for any blurry
pictures. I had to use my phone) 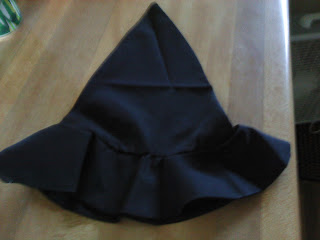 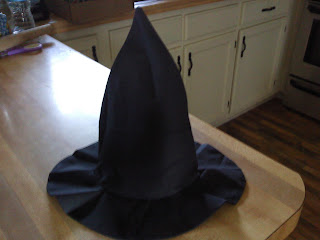 So I looked for
stuff I had on hand,
then I took the hat &
stuffed it with newspaper
to hold it's shape.
Then I took some
fabric stiffener &
brushed it on. 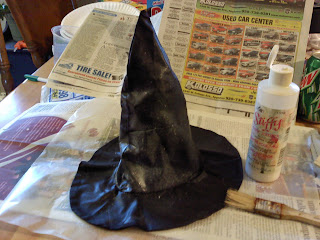 Then I sprinkled on
some cinnamon to
grunge it up a bit.
I added a piece of
tea stained cheese cloth. 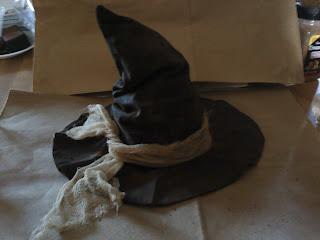 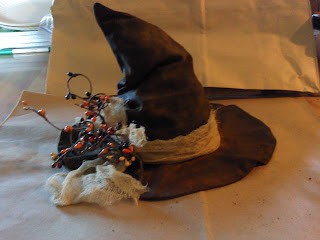 Then I added faux berries,
leaves, sweet annie,
a little moss & a tag
that reads...
*LOVE POTION*
Eye of a Newt
Wing of a Bat
Thirteen Whiskers
from a
Cross-Eyed Cat!
(I scrunched the hat
so the tip was facing
to the right.)
I placed a grungy
tea-lite on the brim
& hung a star
from the tip.
And this is the
finished
Witches Hat! 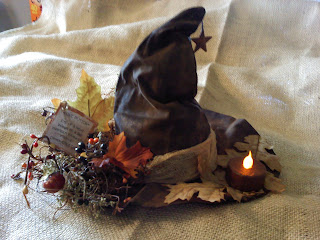 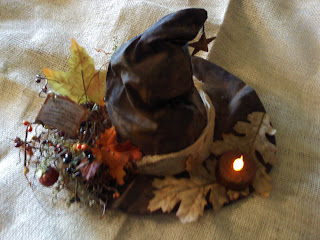 I had so much fun
decorating this hat!
Thanks Janice!!
Posted by Sandi @ The Primitive Skate at 3:38 PM 7 comments:

I am a few days late with this post, I'm sorry!
I don't know where the days have went.
They just flew right by!﻿
I got soooo much going on between the dog
and everything she went through...
and my 10 yr old going back to school...
trying to get him back into a routine...
and my job of course..
and then my middle son cut 3 of his
fingers at work...took him to the ER...
and I took my truck in for an
oil change and they found some part
underneath the truck broke
and I needed back brakes sooooo
$300 dollars later....
then my oven quit working
so I have a repair man coming out for that
and enough babbling...
let's get to the Winner!
I had 17 people enter my giveaway
and you all qualified for multiple entries....
I put everyone's name in a basket...

And my son drew the winning name﻿....Congratulations to.... 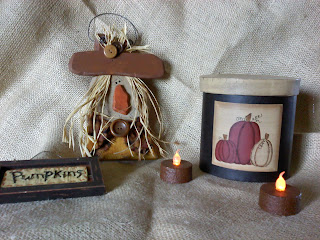 This is what you won....
Wendy if you will e-mail me your address...
I will get your package in the mail.
Thanks to everyone who entered.
Posted by Sandi @ The Primitive Skate at 10:18 AM 11 comments:

I want to "THANK" everyone  again for all your care and concern
after WHISPER had surgery to remove some Bladder Stones.
It has been a tough 2 weeks, but Whisper just had her checkup
on Friday and The Vet said she is doing amazingly well.
The first 5 days were insane! I really didn't think she would make it.
Not eating, not going to the bathroom, she had a fever....countless
calls and trips to the Vet, little or no sleep. But we managed.
Did I mention when the Vet first took x-rays and seen the stones,,,
there were 4 large ones and he suspected there were a few small
ones too. Little did we know that there would be 50 stones.
Yes, I said 50 stones! 4 large ones the size of marbles and the small
ones ranged from the size of a grain of sand to the size of
a pea! The stones were sent to the University of Minnesota
for Research. The report came back saying the stones formed
from the food she was on and needs to be on a special diet
from here on out.
She's been on Purina Dog Food her whole life!
They want her on Science Diet
(for the urinary tract) Not only is this food expensive, she won't
touch it. They told me to mix a little of her purina food with it
until she gets used to it. Ha! she picks out the purina and leaves
the other food. She did this for a couple days, I called them back
and they said she will eat when she gets hungry. Well she won't
touch it! The chances of her getting these stones back again
is very high, especially if she doesn't eat the food they want
her too! Any suggestions, anyone!
﻿
Posted by Sandi @ The Primitive Skate at 11:00 PM 3 comments:

Good News!!!!!!  My fur baby is on the mend and almost back to her old self!
She finally had a bowel movement yesterday, before I left for work.
And after that she has been running around and wanting to play!
I was panicking, it's another week before she gets her stitches out.
She was just so silly when I came home last night. She has been sleeping with me,
so I can get up and take her to the bathroom at night. (She needs to go out every 2 hrs.
to retrain her bladder) anyways, I put her on the end of my bed on a folded up blanket,
because she's been having accidents. I went to the bathroom and when I came out
she was laying on my side of the bed and she wouldn't move.
So I slid her over and layed next to her. We both fell asleep and when I woke up
5 hrs later, I was thinking OH MY GOSH, I didn't wake up to take the dog out.
Needless to say, she was dry, no accidents, took her out and we went back to sleep.
Today she is just a ball of energy! Finally after a loooong week,
I think she is going to be okay! Thanks for following along on our
journey. Thanks for all your support and prayers for Whisper.
I so do appreciate it!
Happy LABOR DAY everyone!

Thanks again to everyone who left comments, kind words, gave me some advice on what do for Whisper & said a prayer.
The Bland Diet the Vet put her on worked. She started eating right away!
The pain pills and antibiotic are working. She would not get up on her own. We carried her everywhere!
After taking a few doses of medicine and getting some food in her belly, she decided to be brave and get up on her own and walk. Now she follows me everywhere and don't leave my side.
I was sitting next to her on the couch today and just like that she  jumped off  and almost gave me a heart attack. I thought for sure she ripped her stitches open.

This is her 3 days after surgery... 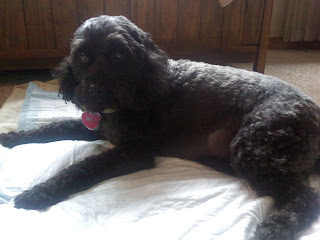 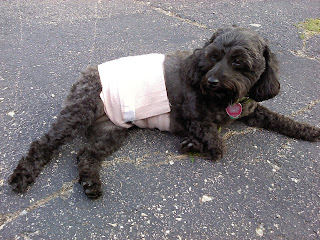 So that was the good news...saving the bad news for last. After 3 days on the Bland diet Whisper has not had a bowel movement, which concerns me. It's been since saturday and today is thursday.
So I called the Vet again today and he said there was a couple things I could try....giving her canned pumpkin, or chicken noodle soup, or a little vegetable oil. He said this would loosen things up.
If this doesn't work by Saturday, she needs to go back in for an enema!
I have never had this happen to an animal in my life...so I don't know, it sounds crazy to me, but he is a very popular Vet. This isn't just a Vet Clinic, this is an animal Hospital. He sees all animals, dogs cats, horses pigs, cows, you name it. He's been in business for many, many years. People come from all over. He is very reasonabley priced compared to other vets around my area.
So I guess it doesn't hurt to try...thinking she would have results by tonight. No Luck yet!
So I am asking all you pet owners out there, do you have any advice, ideas, anything that I could try???
I would hate for her to have an enema!  Any help would be appreciated! 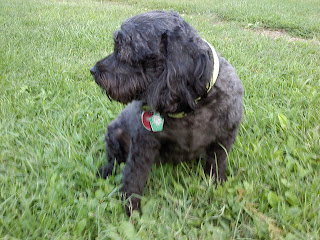 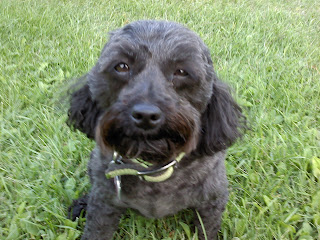 ﻿
﻿Looks like she's giving me a dirty look here! Probably thinking, get that camera out of my face! Lol!
Posted by Sandi @ The Primitive Skate at 9:51 PM 5 comments: 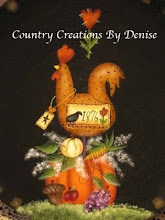 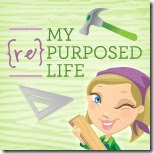 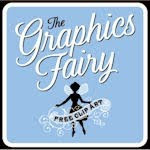 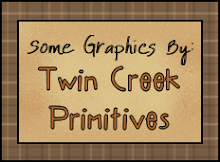